After our twelve days of Museum crawling, I think we all have a much better appreciation of what makes a museum ‘good’. One of my favorite phrases that we picked up was ‘interesting curatorial choices’, meaning that even when events were presented badly (either too blandly, without context, or with obvious bias) it still teaches us something about past and present culture (just not what the curators had in mind).

The Haus der Geshichte was still somewhat guilty of tailoring history to fit a particular narrative, but I felt like it was to a much smaller extent than other museums. Haus der Geshichte presented the years after World War II until present; the Holocaust was given a place in the museum, a black box showing a photographic timeline of Germany’s march toward genocide. I appreciated that the museum showed that it is impossible to accurately depict history from one fixed point on; each event is shaped by the previous.

All the architects in the group loved this building; even with my abysmal knowledge of architecture, I appreciated the care and thought that went in to making the museum physically accessible, and to create clever glass windows that link subsequent years and ideas. Autumn said it best, I think, on how the architecture helped make the museum wonderful. She said that it was a really nice difference having a building be tailored to fit a museum and amplify certain elements, rather than squashing artifacts and history into a pre-made, boxy building. The design of the building allowed for the freedom of narrative expression, rather than history being figuratively, and somewhat literally stuffed into a box. The only box used was the one willingly added, on the Holocaust. So does the inclusion of this box show that the Holocaust continually affected Germany after the war, or does the ox shape suggest Germans trying to package it away and move on from it, or both? I still can’t decide, but I think a museum that makes me have questions like this are good.

Haus der Geshichte also had one of my favorite exhibits; they displayed four flags sewn by Germans soon after the end of the war. A British, Soviet Union, French, and American flag hang in a brick wall, each with odd coloring. This is because Germans destroyed and repurposed Nazi uniforms and flags to reflect Allied victory. Where lots of museums we’ve visited have cut up history to fit a particular narrative, the past Germans have almost physically done the same; they’ve cut up Nazi power, willingly or unwillingly, effectively or ineffectively, to create a narrative that Germans all welcomed Allied victory. 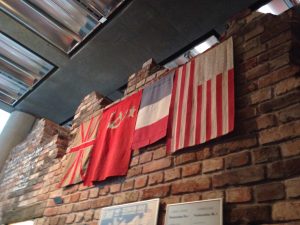