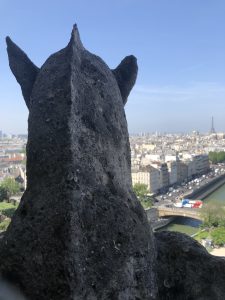 “If the walls can talk what would this say?” This thought and expression has been racing throughout my mind, while visiting Paris, France during our trip.  Some European architecture has been around for centuries and decades standing the test of time. These hallowed structures have been inhabited through out the years experiencing the ebbs and flows of European culture from Romanesque to Gothic architectural designs. This makes my think of how little my twenty-one years of life has seen in comparison to these magnificent structures, as in the example of Notre-Dame.

Notre-Dame is a cathedral, which is widely known as the best example of French Gothic architecture. This cathedral is the one of the largest and best known throughout the Catholic Church in France and within the world.

While having an understanding of the Gothic architectural period and knowing the historical church significance of Notre-Dame’s Cathedral, I could not help myself to be awed of its magnificence achievement but was interested in what the hallowed walls and statues have seen through the course of its life. 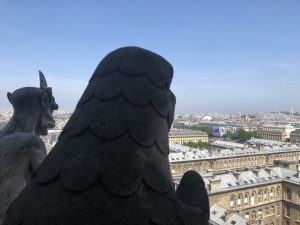 The eyes of Notre-Dame can be seen in its Gothic decorations, which includes the crafted statues placed outside to serve as column supports or struts for water spouts. Among these are the famous gargoyles, designed for water run-off. In addition, the Saints and Apostles look down from their perches witnessing everything silently with their eyes wide open.  Nothing is hidden from them because the gargoyles, Saints and Apostles are the eyes of the cathedral.  One can feel his or her piercing eyes watching you physically but also penetrating into each person’s soul.

Giving them a voice, what would these stone statues tell you? They have seen the good, the bad, the fire, the light, and the darkness. These Gothic statues stare at incoming visitors and the local people of Paris for its entire life and existence. Watching over the living and the dead. They are the historical guides, the keepers of the cathedral memories, and hold the visions of the future.