On May 26, the 2019 Normandy Scholars cohort said farewell to each other surrounded by the canals of Amsterdam. After a semester of studying the memory and history of World War II, the students put all that they had learned into our trip through the UK, France, and the Netherlands. As you all have followed us along our trip, there have been key visits to Bletchley Park in London, the D-Day beaches of Normandy, the Shoah Memorial in Paris, and the Anne Frank House in Amsterdam each where we experienced various sites of memory first hand. 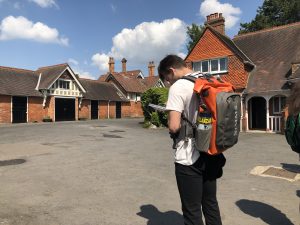 Along our 13-day journey each Normandy Scholar posted various blog posts reflecting on the various sites of memory and museums we visited along the way. These blogs were not only insightful, but reflected on aspects of the sites that had never occurred to me, from Anne Frank’s house and its reflection of an amusement park of memory to the beaches of Normandy feeling like an american pilgrimage. When becoming the Graduate Assistant for the Normandy Scholars Program I was not sure at first what to expect, but this program has proven to be more than just a seminar examining memory and its place in cultural and political agendas, but has acted as a diving board for our students to be able explore the world and sites of memory all around them. For example, each of our students (especially our architecture students) paid close attention to the details of each building and museum we saw. They dove into the cornerstone of meaning behind each detail of a building or museum. One student in particular took interest in why the Imperial War Museum in London was placed in a former asylum and what impact that had on memory. 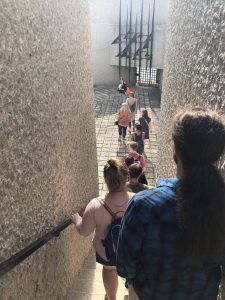 Our students also examined aspects of memorials during the trip, one was a comparison of both of the Jewish Deportation memorials in Paris and Amsterdam, dissecting their meaning and collective confrontations with the past. Reflecting on our trip and the sites we were able to encounter, I truly am proud to have been apart of this course and program as their Graduate Assistant, but I am also astonished to see how much our students have learned throughout the journey.

I can say for myself that these past two weeks, I have had such a great privilege in helping lead the UTK Normandy Scholars of 2019. Looking back it was quite a full trip from flying across the pond to London, traveling in a ferry across the English Channel to Caen, hiking up the beaches of Normandy, and then traveling by train through Paris, and finally finishing in the canals of Amsterdam. The sites we saw and experiences we had are ones to truly remember. Thank you for following this cohort of Normandy Scholars and we look forward to following the 2020 Normandy Scholars next summer!