While we did visit official memorials and museums, some memorials are tucked into the architecture of Cologne. Stumbling stones, or “stolpersteins” as Germans call them, are commonplace on the sidewalks. These brass blocks inserted into the regular pattern of the cobblestones feature the names of victims of the Nazi regime, most often Jewish victims. The idea seems like it would be easy to miss, but the rest of the group and I found ourselves recognizing these blocks quite often. The blocks are placed outside of the person’s former home – sometimes they are clustered together in families and sometimes they are found alone. A quick Wikipedia search will tell you that they constitute the largest decentralized memorial in the world with around 67,000 installed. 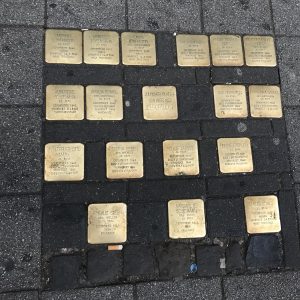 In an interesting contrast and not too far from some stumbling blocks, one can find a fountain and a building with “classic roman designs” (read: swastika.) The swastika was co-opted by the Nazis and the two seem so entangled that they cannot be separated. As a visitor to the city I was quite shocked by what appeared to be a blatant display of Nazi symbols. Perhaps I do not know about the symbol as a feature of design and maybe I lack the knowledge about architecture history to substantiate this idea. The designs were constructed before the rise of the Nazi party. Nonetheless, I was surprised to see this, given the laws regarding Nazi iconography in Germany. 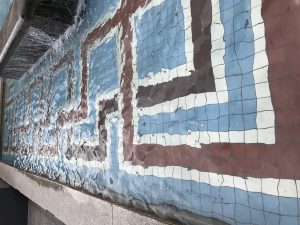