In class, architects learn that any space someone acts or participates can become a designer’s dreamscape or landscape. This can be in the form of a room or a simple pathway, hallway, or even a park one may walk through or visit. 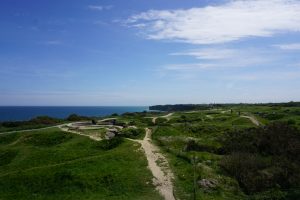 Originally Pointe du Hoc, the highest point between Utah Beach and Omaha Beach, was originally designed as a Nazi keep or a look out of the Normandy coastline.  The German army fortified the area with concrete casemates and gun pits (pill boxes) to propel any future invasion.

Prior and during D-Day the Allies bombed the area excessively in order to create a landscape for distraction. Strategically the Allies shot missiles and bombarded the German defenses from the air and sea in order to take out their forces and defenses to support the invasion. On D-Day, a US Army Ranger group assaulted and captured Pointe du Hoc after scaling the cliffs.

The site now is a profound landscape with various design elements making up the park, e.g. the German’s designed pillboxes, which can still be inhabited today. The park provides modern stairs and platforms that have modified the pillboxes so visitors can have a different viewpoint or perspective of the beaches. 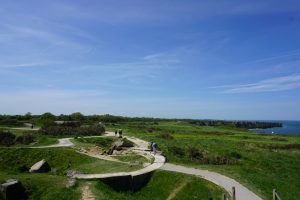 However, there is one thing that fascinates me concerning this landscape, which are the craters left behind by the Allies bombardment. The strategic shelling targeted the German firepower on the coast, leaving craters carved in the landscape both horizontal and vertically. The horizontal ridges left behind are from the cruiser or ship’s missiles, which were launched; whereas, the craters or vertically holes were from the air strikes on the coast.  These devices or ruins crest the landscape of war at Normandy.

As time passes nature takes over filling the craters with vegetation, producing its own natural memorial or landscape with little need for a designer’s interaction. The remnant of war on the Normandy surroundings creates its own memorial landscape design, which forever is etched in current and future visitor’s minds.