Cologne displays some interesting artwork; so interesting, in fact, that I felt the need to share my thoughts on it immediately after returning to our hotel for the night. One striking piece of artwork is the large mural depicting a medieval Cologne under siege by bow wielding warriors, attempting to breach the barrier of the city by ramming a giant banana battering ram through the city gates. Phallic imagery and accompanying Freudian readings of this aside, it was striking the freedom that the artists had in using such a silly and lewd image to depict a battle. This showed that the citizens of Cologne were distant enough from this particular battle to not feel protective or ashamed of it; its narrative could be presented in a new way without too much backlash. 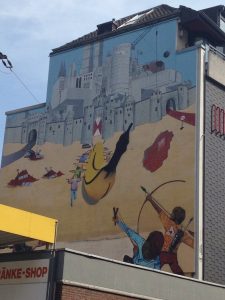 This contrasts harshly with how World War II is memorialized in the city. Very subtle, counter-memorial-esque plaques dot the city, each showing the name of a deported Jewish person, along with their time and place of death, on the threshold of the home they were taken from. There is no gaudy or lewd aspects of these memorials; the emphasize loss and the physical place that the loss occurred without being flashy. This shows that the Holocaust is still much to fresh in the minds of Cologne citizens to have anything like the sort of freedom of creative expression that the banana artists did. I wonder if the Holocaust ever will, with the nature of genocide being so much fundamentally different than that of simple war. 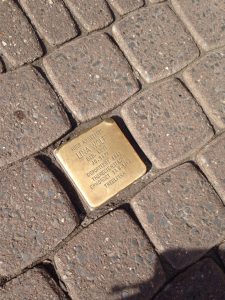 The placement of this particular plaque was also quite ironic. Lina’s plaque is now in front of a Merzenich chain, which was begun by the Nazi Merzenich. So even though the Holocaust is fresh enough to prevent outlandish artistic representation of it, it is still distant enough that people don’t feel strongly enough, or are not informed enough, to understand the irony of this placement. 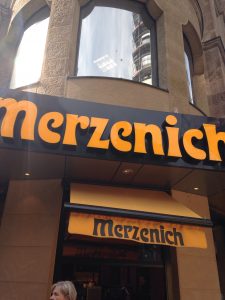