A tradition that happens when I come home after study abroad or school is catching up on the most recent season of Saturday Night Live. This current season Bill Hader hosted, and when he hosted three years ago, he created one of my favorite shorts: The Group Hopper. This short was a parody of the dystopian fantasies such as The Maze Runner, Divergent, and The Hunger Games. Even though this short has nothing to do with our class, it kinda reminded me of myself in Europe. 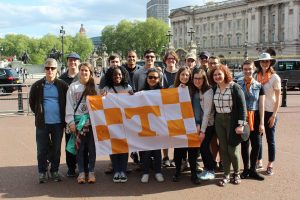 The 2018 Normandy Scholars outside of Buckingham Palace. Who knows, one of us may be part of the royal family in the future.

I call myself the group hopper because when we had free time, I would just go with the flow and hang out with the people who wanted to see something I had not yet. One of my favorite activities was observing the architects in Paris. Jay took us to the Beaux-Arts museum in Paris to see the the resistor exhibit. Once we walked inside the building, one by one, each architect realized that they were in the Beaux-Arts School, and all of them flipped out. They were standing in a building that influenced architecture as we know it. 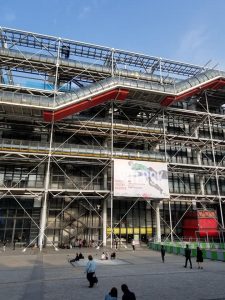 I also loved watching the architects upon seeing this building: the Pompidou Center. I walked in thinking about how odd the building was, but to them it was a work of art. I needed everything explained to me, including an explanation on how revolutionary it was to architecture (What made it better is after I would get the architect explanation, Jay would give me the sarcastic explanation). Seeing the world through their lens was fascinating and truly gave me a deeper appreciation for art. 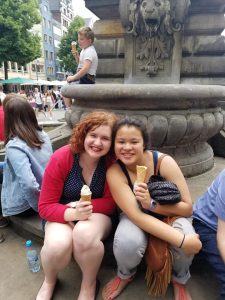 Finally, this trip made my friendship with this girl so much stronger. Hannah and I have known each other since freshman year, but us being roommates on this trip was a fantastic bonding experience. Each night was like a mini-sleep over (unless we were exhausted). We would talk about concerning issues, and how the trip was going. During the school year, she and I both lead very busy lives, where we may not have time to see each other. I loved hanging out with one of my dearest friends, and I am so excited for her upcoming adventures in Europe (We are both awful with photos so this is our first picture of just the two of us in three years).

The inaugural Normandy Scholars cohort was a fantastic group. We had representation from all over campus. Even though we all focused on different areas of study, WWII and its memory brought us together. I had a fantastic time with everyone seeing many lieux de mémoire. I enjoyed having modern art explained to me by architecture students who see things in a completely different light than I do. Will and I had some of the greatest foodie adventures, and my professional third-wheeling skills came out when I hung out with the “bromance.” Thank you all for starting off my summer with a bang.