After a day of shopping for gifts, Raman, Ian, and I were going to go to the Cologne Cathedral and climb it. As we were walking out of the hotel, we ran into Claire, Jonathan, and Reagan. They just climbed to the top, and were asked to leave because mass was about to start. So Raman, Ian, and I were trying to find things to do, and we thought that we should try to hit up the area near the university. As we try to map our logistics to where we want to go, our glorious professor appears. He asks us where we want to go, and when we say University, he says he is going to the same place and guides us down there. While there Dr. Magilow gives us a tour of the University, he tells us a few stories about his year there. He told us about how the library would close at 7 PM. They would tell the students that the library was closed and that ‘the rest of the afternoon would be free.” He also showed us the places where he played soccer and the typical cafeteria setting. He later then showed us the Synagogue, and good bookstores and places he would eat at. He also showed us local soda shops and other hole in the wall places. It was also fun to see the shock on his face when we passed by places that were still open from 20 years ago. Walking around Cologne with Dr. Magilow was one of my favorite experiences that I have had here. Having his insider’s perspective made me appreciate Cologne more and reflect on the beauty that a small city can bring you. 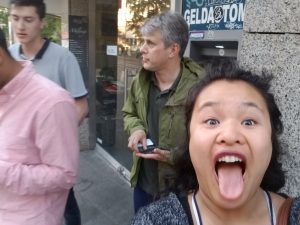