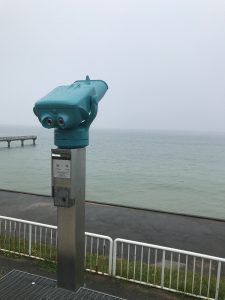 Two words. Omaha Beach. Omaha Beach is a landing area in Normandy, northern France used by allied forces in the WWII D-Day invasion. After arriving to the beach with the class, I really grasped the immensity of this war. For starters, the weather was almost the same weather as it was when the war was going on, rainy and cloudy. Next, I realized how the tide would increase with every wave, which made me think of the men and objects going with the wave during the war. Finally, I understood the walk to get to the bunker/top of the hill that the men had to take. I remember when Vassiliki, our tour guide, mentioned how it took about 6 hours for the men to get up the hill, when it only took us 6 minutes. Being at Normandy really made me understand what these men went through during the war and why they are called the “Greatest Generation.” These men sacrificed so much during this war. They had to fight in hard conditions, dodge German bunkers, and stay alive. After being on Omaha Beach, I felt humble and grateful for what these men did for our freedom. Omaha Beach is way more than just a beach. It’s a place where one can focus and realize what happened there, reflect on the past, and think about the future.