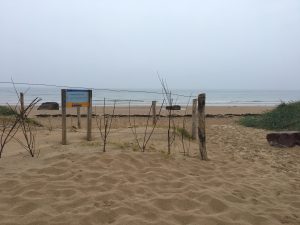 As a Normandy Scholar, it feels most appropriate to spend some additional time reflecting on our visit to Omaha Beach. Since January, large portions of our curriculum have tied back to the D-Day invasion, but no article or class discussion can truly put the magnitude of the operation into perspective until you step foot on the beach. When we pulled in front of Omaha Beach early Sunday morning, I felt the mood shift on our bus. The fog only added to the picture, creating similar weather conditions they faced in 1944. When we made it out onto the beach, the parts that stood out to me the most were the numbers. Our tour guide, Vassiliki, kept reminding us of those same numbers and figures we’d been hearing all semester (and for that matter, most of our lives). But here, they sounded different. Here, when Vassiliki shared that 9 out of 10 men in the first wave didn’t make it to shore, the image of D-Day was no longer somewhere far away. Instead, we were standing on the very same ground. It was even easier to think about how our study abroad group could apply to those numbers. We were among the very few actually on the beach that morning, so it really started the feel like only two of us would have made it to the top of the beach as we were walking up ourselves. In our most recent class discussion, we debriefed these thoughts in relation to the Greatest Generation narrative. We were asked to consider how our Normandy experience may have shifted our attitudes toward Tom Brokaw’s “Greatest Generation” argument. Part of me has always believed that the “greatest generation” title would have landed on any generation that fought in the war. However, as I was walking up the beach with my classmates, I couldn’t help but wonder if the average person our age could find the strength, bravery, and power in an invasion that those men found on the beach in Normandy 75 years ago. With so many people falling around us, I’m not certain that our generation could keep fighting the way theirs did. Therefore, after putting myself and my peers in their shoes, I think that the “greatest generation” title is well deserved.