British cuisine has garnered a less than stellar reputation. It’s generally regarded as bland and unappetizing. Is this reputation earned? I admittedly expected London restaurants on the whole to serve mostly bland pub food. What I did not prepare for is how large and diverse an array of world cuisine London has to offer. In my three days in London I have eaten delicious and authentic Indian, Thai and Filipino cuisine that left me very impressed.

For our first lunch in London, neither of us were exactly craving British food, so we decided to try out the Indian restaurant by our hotel called Masala Zone. I was absolutely starving so decided to indulge with the butter chicken thali, or Indian round platter. My butter chicken came with a variety of vegetable curries that were aromatic and spicy without being overwhelmingly so. The butter chicken itself was very savory and had a nice kick to it. I ordered some garlic naan to soak up the curry, and it was fragrant, fluffy and addicting. I paired my meal with a delightfully sweet mango lassi to cool off with. 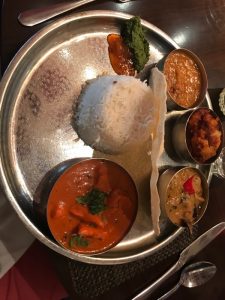 The next day our lunch stop was Churchill’s Arms. The restaurant is a wonderfully unexpected anomaly: half Winston Churchill-themed British pub, half Thai restaurant. I ordered their specialty pad Thai with prawns and the menu-recommended pairing of a White Zinfandel, being a lover of rosé. The pad Thai was the best I’ve ever eaten, bursting with flavor, and the prawns were plump and juicy. 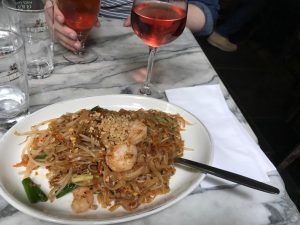 My last lunch in London was at Lutong Pinoy, a Filipino restaurant a short walk away from the hotel. I was eager to try Filipino cuisine for the first time but had never eaten it before. Since I was unsure what to order, I went with the buffet. None of the buffet items were labeled, so I decided to be adventurous and go for a variety. The crispy whole sardines did not look very appetizing but were actually rather tasty, crispy and salty. The only part I didn’t care for was the beef curry which was rather bland compared to the rest of the plate. My favorite part of the meal was actually the cold glass of guava juice I ordered, which tasted like mango juice but better and more tart. 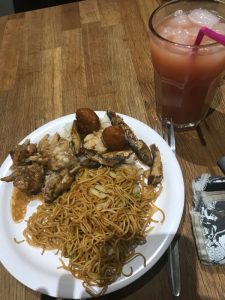 Overall, I was very surprised with the variety of delicious world cuisine a short walk from my hotel. If I had to pick my favorite it would be the pad Thai from Churchill’s Arms. I have eaten a large amount of pad Thai in my life, and this was hands down the best. Never would I expect it would come from an English pub!