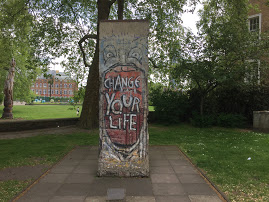 Pictured is a piece of the Berlin Wall that is on the grounds of the Imperial War Museum.

During the post-War era, the Cold War tensions between the United States and the Soviet Union- along with the states willfully or forcefully bandwagoning with them- nearly devolved into cataclysm. Similarly, states were formed, reshaped, or overthrown by larger powers seeking greater security in their respective regions and on the international stage. Perhaps I questioned the exhibit’s simplistic narrative because of a book I have been reading during my trip by Odd Arne Westad called The Cold War: A World History. Consequently, the Cold War has been on my mind especially with relation to World War II during my visit to Europe.

I later reflected on this point after seeing two interesting parts of the Imperial War Museum. One was a monument to the Soviet troops who died during World War II fighting the Nazis, and the other was a piece of the Berlin Wall kept by the Imperial War Museum. This struck me as an interesting juxtaposition. The Soviet monument serves as a reminder of the sacrifices of a wartime Ally, while the artifact of the Berlin Wall signifies the terrible oppression brought on Eastern Europe by the Soviet Union. 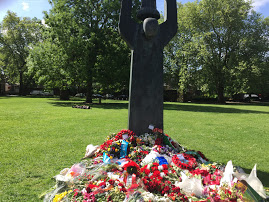 Pictured is the monument to the Soviet soldiers who lost their lives during World War II.

Later that day I really began to appreciate this juxtaposition. The juxtaposition- intentional or not- by the Imperial War Museum refutes the myth of global peace after 1945. There could not be a stunde-null for the world just as there could not be one for Germany. The ghosts of World War II’s bloody conflicts live on and still affect the world today. Understanding this history along with the complexities of the past are key to understanding the nuances of the present and the potential pathways of the future.