May signifies the end of the school year, graduation, and for ROTC cadets, commissioning season, where they are sworn in as an officer in the military. Even though I missed many graduations and commissioning ceremonies to come on this trip, going to the Royal Air Force Museum in London allowed me to show my love for Airpower.

This past year, I served as a national officer for the student branch of the Air Force Association. As a national officer, I was able to meet many distinguished generals and foreign attachés. One of the foreign attachés I met was Colonel Trautermann, the German Air attaché. While Nate, my Auburn counterpart, and I were introducing ourselves, he saw Nate’s last name and asked if his father ever served in the Air Force. When Nate said no, his grandfather did. Colonel Trautermann then asked if Nate’s grandfather was a squadron commander at a base in California. Nate replied that he was and said his grandfather’s name, Russell C. Lowmiller. Once the colonel heard the name we discovered how small the Air Force was. Colonel Trautermann told us that Nate’s grandfather was his squadron commander. We are all shocked and amazed by this story. Nate and the colonel grew close throughout the conference, that by the end of the conference, Colonel Trautermann coined Nate and gave him his iron cross, which is a huge honor.

At the conference, we were waiting for lunch and the Colonel saw my blazer and asked me why I had an F-22 pin on. I told him that in the civilian sector, plane pins are collectibles and we only wear them when we attend Air Force conferences. He told me that he was going to give me a European fighter jet pin, so I can have something that represents the European Air Force. At the Royal Air Force museum, I saw this plane; which was the pin he gave me, and all the memories started flooding back. Even though I missed my Air Force friends’ commissioning ceremonies, seeing that one plane brought me a bit closer to them all. 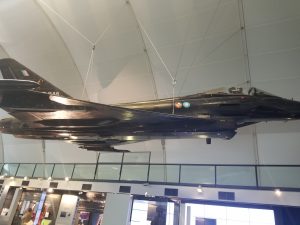