On our first day in London, England, we took a walking tour of World War II memorials. The beginning of this tour showed many different memorials that were variously located in Green Park and then ended with the sight of the Women of World War II memorial in front of the Foreign and Commonwealth Office. The Women of World War II memorial resonated with me as a woman because this one was dedicated to all women who partook in the war effort. This immediately made me compare this memorial to other women-designated WWII memorials that I have previously studied. At first, none truly came to mind. The closest that could compare in my memory is the commemoration of French women who participated in the Resistance. However, the honors they were given are vastly different than this memorial. To give an example of this difference, le Panthéon in Paris is a mausoleum that honors important historical individuals. Yet of the many individuals located inside, only five women are buried there. Of those five, only two are women who were resistors. However, many male individuals from the Resistance that were honored after WWII. Unlike le Panthéon, here in the middle of beautiful London, there is a large memorial on a bustling street entirely dedicated to those brave women that served in the war effort. I truly appreciate the integrity of Great Britain by remembering their female counterparts’ effort in winning the war, as war memorials dedicated to women are few and far between. For any woman visiting the city, this particular memorial is a must. 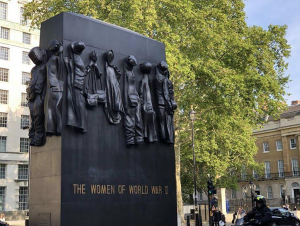