On our second day in London, I witnessed many different memorials to British and other Commonwealth soldiers.  One particular monument peaked my interest.  It was a large memorial in the center of London that commemorated the men who were involved in the bombing raids over Europe.  These men are heavily part of British memory due to their roles being intertwined with the Blitz.  The common narrative associated with the Blitz is that the British, especially Londoners, were relentlessly bombed by the German Luftwaffe.  In retaliation, the British Bomber Command attacked German targets.  As a result, the British often hold up the men of Bomber Command as heroes and saviors, which can be easily seen in the design choices of the memorial.  In the memorial, a bomber crew is depicted wearing full flight gear. 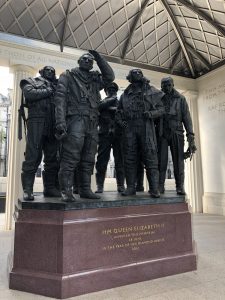 On a nearby wall, a quote from Prime Minister Winston Churchill exemplifies the importance of bombers in the war, in which he asserted that “bombers alone provide the means of victory.”  Additionally, the memorial seems to have a footnote located above the statue, if looked at from the front. The line says that the memorial is also for other countries whose men were killed during bombing raids against Germany. In all, the memorial to Bomber Command was very interesting and eye opening as to how important this memory is to Londoners.