I tried my best to avoid eating any British food, which has a less than stellar reputation, while in London. France, on the other hand, boasts what many claim to have the finest cuisine in the world. I hence decided to order some French classics while in the country that I’ve never had the chance to try before. Being a more adventurous eater than most, I had been wanting to try escargot and foie gras for years. Visiting Paris finally gave me the opportunity to do so.

My opinion on escargot is conflicting: delicious, but an absolute frustration to eat. I had ordered a dozen escargot at a bistro near our hotel. They were prepared in a delicious pesto garlic sauce. Escargot have a taste and texture similar to oysters, which I love. Unfortunately, they are ten times more difficult to consume. I was given a prong and pair of tongs to hold the shells in place and pull the meat out from the inside. The shells were too hot to hold in place with my hands. I am not a master with tools, and the prongs proved unwieldy, resulting in three shells being flung off the table. Every platter of escargot should be served with a yellow “Handle with care” sign. Thankfully the escargot paired delightfully atop the baguette slices which were brought to the table. 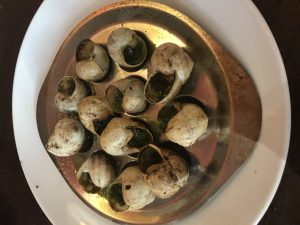 My encounter with foie gras was an unexpected delight. The group I was with Wednesday night all wanted crepes, which I enjoy but already had two nights in a row. Reluctantly I insisted. Fortunately, the creperie we went to, Chez Marianne, had foie gras galettes for their special du joir (important distinction: savory crepes are apparently called galettes). For those unaware, foie gras is a goose liver pate. The galette’s presentation was quite eye-catching: two rounds of foie gras with colorful berry and onion jam. The foie gras tasted like heavenly duck-flavored butter. The flavor was extremely rich, and it melted in my mouth. The variety of jams complemented the foie gras very well. 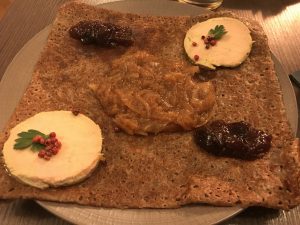 Neither snail not goose liver sound particularly appealing, yet both offered pleasingly bold flavors. The winner between the two was far and away the foie gras, if only for the fact that extracting escargot from the shell is a laborious process. Furthermore, while the escargot wasn’t  very filling on its own, the sheer richness of the foie gras left me immensely satisfied.