From the Spitfires hanging in the atrium to the Holocaust exhibition, the Imperial War Museum was fantastic.  Going through and observing some of the different weapons, aircrafts, and other objects from the war showed how large of an impact the second world war had on the British and the large death toll it caused.  While the first world war also had a large impact, it was evident that the focus of the Museum was on the second world war.  I preferred this focus, as it allowed for more information on different aspects of the war, such as the use of the Spitfire fighter plane or the bombs used by the Germans.  An interesting facet of the museum was the Secret War exhibit, which outlined the use of spies throughout the war.  This also included a mentioning of Bletchley Park, and the use of codebreaking, which helped to shorten the war. 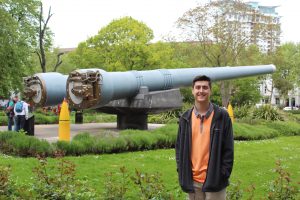 Naval rail guns outside of the Imperial War Museum

You can’t go to the Imperial War Museum and not see the Holocaust exhibition. I found that this exhibition was incredibly well done, especially with its use of chronological order for the displays.  With this the exhibit was able to show what life was like for Jewish people in Germany before Nazi Germany, then how the transition to the Third Reich effected the Jews, and finally depicting the horrors and atrocity from the camps under the cover of war.