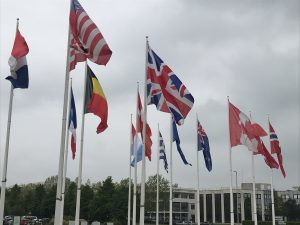 Over the past two weeks, the Normandy Scholars Program took us through memory lane in Europe. There, we visited four different countries dedicated to the remembrance of the events of World War II. Looking back at our study abroad trip in Europe, I am really grateful to experience this new journey with some great friends. Throughout the trip, we learned and saw how people lived during World War II. We visited many memorials, synagogues, cemeteries and museums to grasp the idea of what these people went through during the war. One place we went that still sticks with me is the Anne Frank house. I am still trying to understand how Anne, her family and friends survived in the house for two years without getting caught. It just amazes me how they were able to do that. After visiting each country, we understood how that country (London, Caen, Paris and Amsterdam) played before, during, and after the war. Each country had something new for us to know and how its people were affected. Even though each country was different, each place has given us a greater understanding of the identity of that country and how its recovered after the war. Overall, I would advise other students at The University of Tennessee Knoxville to take this course no matter their major. Even though I am an agriculture major, this course has broadened my horizons and has taught me so much about World War II and the effects after it.