On May 9, the 2018 iteration of the Normandy Scholars Program moves into its second phase. After a semester studying the history and memory of World War II, it’s time to put that knowledge into practice, so we’re packing our bags for a study abroad experience that will take us to the UK, France, and Germany.

You can travel along vicariously through this blog, which this cohort of Normandy Scholars is developing as a collective class project. The point of our 13-day journey is to experience firsthand some of the sites of memory (so-called lieux de mémoire) that we examined in the seminar and to understand how posterity uses—and abuses—memories of this turbulent era for contemporary political and cultural agendas. 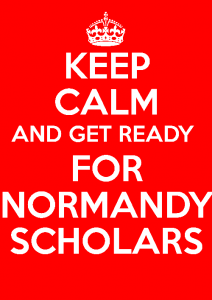 In one course unit, for instance, we studied the spread of “Keep Calm and Carry On” memes. A common understanding of this catchphrase is that it represents the stiff upper lip wartime stoicism that unified the British, especially during “the Blitz” from September 1940 to May 1941. We learned, however, that the slogan actually dates from the summer of 1939, when the British Ministry of Information first circulated it on public safety posters to boost morale and encourage citizens to be prepared. Soon thereafter, it fell into obscurity and only reemerged around 2000 when a bookseller found an old poster. Why has it returned now? In our seminar, we considered the British writer Owen Hatherley’s argument from his 2016 book Ministry of Nostalgia that the phenomenon exemplifies “austerity nostalgia.” According to Hatherley, the slogan has taken on new life since 2000 as an expression—conscious or not—of how the British should accept economic austerity measures that have eroded the UK’s social safety net. They should do now what they (supposedly) did during the war: keep calm and carry on. In this case, nostalgia for an imagined unity during World War II provides a model for how to cope with contemporary challenges.

We have a full trip ahead of us. The itinerary for thirteen days fills sixteen pages. And while it’s impossible to list everything we’ll see and do here, highlights will include visits to Winston Churchill’s bunker at London’s Imperial War Museum, the D-Day beaches of Normandy, and a former Gestapo dungeon in Cologne. We hope you’ll follow along.