While in Cologne, I took a tour across the city in which historical sites were pointed out.  Spanning the river Rhine, a bridge had been constructed shortly before World War I in the year 1910.  At the bridge’s four corners, a different statue was placed.  On the corner closest to me was a man in military uniform riding a horse.  I recognized him almost immediately as Kaiser Wilhelm II. 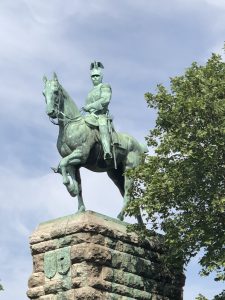 This man was Kaiser of the German Empire during the First World War.  However, at the end of the war, he was exiled.  During Wolrd War II, Kaiser Wilhelm II was known to have been a supporter of the Third Reich, and was hopeful that he could use the Nazi’s to regain his lost power.  This is incredibly interesting to me, since after the war was over the German people of Cologne were willing to keep the statue of a man that had been forcibly removed from power and that same man that had supported the terrible Nazi regime that led to Germany’s downfall.  Furthermore, it is interesting that the German people would keep this statue, since any sort of militarism or government were considered to be causes of the First and Second Wolrd Wars.