While in France, I visited the Normandy American Cemetery.  The experience was truely humbling to see the rows of nearly ten thousand markers dedicated to Americans that fought and died in Normandy.  Included in the cemetery is a wall containing the names of missing service members.  While reading this wall, one name in particular stood out to me: First Lieutenant James B McKamey of Tennessee. 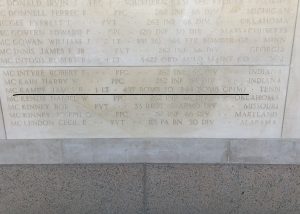 Prior to this, I had never heard of him.  I instantly felt the need to search his name online.  Upon doing so, I learned that 1LT McKamey had attended State Teacher’s College, which is now known as ETSU.  He enlisted in 1942 in Knoxville to become a member of the United States Army Air Forces.  He applied to to become a pilot, and was accepted. At the end of his pilot training, he was given his wings and was made a second lieutenant. He flew his first combat mission in March of 1944.  On D-Day, his aircraft was his by anti-aircraft fire. He gave his men the order to bail, and three of the six men obeyed. Those three were killed while parachuting to the ground. James McKamey and two other crew members stayed with the plane, which exploded over the English Channel. They were never found. James B McKamey was 22 years old. While on a missing in action list, McKamey was promoted to the rank of First Lieutenant, as is currently seen on the wall of missing service members.  1LT James B McKamey is a hero, and should be remembered more prominently by Tennesseans.