Our tour has been conflicting. We have visited these beautiful urban cities and quiet country villages, populated with kind and vibrant people. Yet these places on earth have witnessed death, occupation, deportation, the division of families, and the destruction of existing towns.

Amsterdam evokes this weird condition of having endless picturesque streets with delicate, gingerbread-like houses and clean canals laden with slow-moving boats. And this is paired with numerous museums of the Dutch Jewish experience, exposing how swift the deportation of the Jewish population happened. 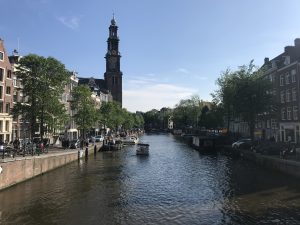 In the Netherlands during the time of occupation, the number of Jews deported was nearly equivalent to that of Paris. Yet, the density of Jews in the Netherlands is much greater due to how small the population is; therefore, when more than 100,000 Jews disappeared over months of occupation, the villages and cities grew empty and solemn. The Dutch knew that many would never return.

One such instance is the home on Prinsengracht 263-267 or more popularly known as the “Anne Frank House”. Even though Anne’s diaries are iconic in sharing a young girl’s emotions through two years of hiding, she is one of nearly 30,000 in hiding in that area. She is one of eight people hiding in the annex. She is one of millions of Jews who died at the camps.

Our visit to the Anne Frank House was filled with tourists. I was disgusted to find some of them posing in front of the home, bright smiles on their faces. Is it appropriate to take photos in front of a home that eight people were compromised and deported, many of whom died? This reminds me of when my mother asked to take my photo in front of the 9-11 memorial; I understood her initial intent but did not feel comfortable to smile in this place where so many died. How does etiquette of memorials, museums, and sites of horrific acts become mainstream? Should there be a guideline for how people act in places? In some, there will be signs to remain silent or refrain from photography. Others decide to abandon the idea of including signage to suggest behavior while visiting the site.

Behavior at memorials is very sensitive, and should be addressed more explicitly so that the visitors and future generations understand the gravity of the events the place is honoring.