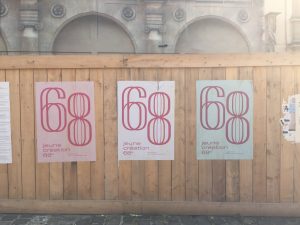 Our time in Paris is marked by the 50th anniversary of the May 1968 revolts and strikes that briefly tore apart French society. The revolts- part of a long line of social disruption including the French Revolution, the 1848 Revolution, and the Paris Commune of 1971- were a rejection of post-War Gaullism and were largely instigated by French Communists and Socialists. Students held demonstrations, worker strikes shut down factories, and universities were occupied by young radicals. The protests severely hurt the French economy and caused severe anarchy and social unrest in Paris. 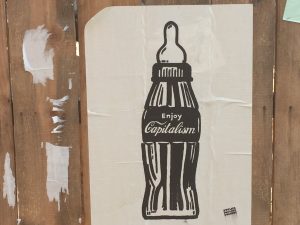 Young radicals inspired by the revolutionary spirit of May 1968 turned their angst toward French society into an artistic movement. Posters, slogans, and graffiti were used by the ‘68 revolutionaries to spread their Communist and Socialist ideology across Paris during the revolt. Fifty years later, these same posters can be seen at the Beaux-Arts de Paris’ Images en lutte exhibition.

During my first day in Paris, I visited the Images en lutte exhibit and was amazed by the works created by the left-wing radicals of the ‘68 protests. The posters reveal the angst toward French society and French politics along with the discontent of the youth toward the old customs of France. The posters are clearly idealistic and somewhat naive in their presentation. Behind the cynicism and revolutionary rhetoric is the spirit of adolescence. Overall, I enjoyed the exhibit because it gave me a new perspective on a section of French history I was vaguely unfamiliar with. 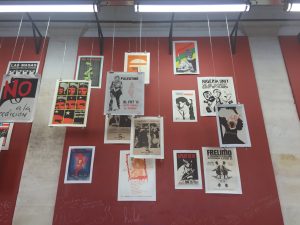 The events of ‘68 are complex and require nuance. To some, the protests were a chance for freedom. To others, such a General de Gaulle, the protests were seen as an anarchic threat to France’s stability. I find that the enthusiastic support and admiration of the protesters toward oppressive rulers like Stalin and Mao absolutely repulsive and deeply problematic. However, I can also understand the youthful desire for something new and life-changing.

The revolutionary attitude of the ‘68 generation (the soixante-huitards) can still be felt to this day. The revolutionaries failed to accomplish their questionable goals of revolution and communism in France. Consequently, France continues to be a stable republic. However, one can still see the roots of the ‘68 spirit in modern protests and strikes.

Currently, rail workers are holding demonstrations and strikes against President Emmanuel Macron’s government. Young French students seeking to recreate the actions of soixante-huitards have also taken to protest. The memory of the May ‘68 revolts still lives on in France and continues to inform the thinking of both academia and the common worker on strike.