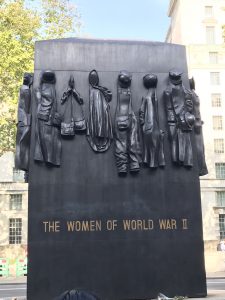 These past couple of days in London, England have been great. I have enjoyed the food, shopping experiences, and the memorials and museums. However, my favorite thing I saw in London was the Monument to the Women of World War II. Over seven million women volunteered or served during World War II. This monument is a British national war memorial placed in the center on Whitehall in London. The monument was made out of bronze and stands 22 feet high, 16 feet long, and 6 feet wide. It was sculpted by John W. Mills, President of the Royal Society if British sculptures in 1982. The monument was unveiled by Queen Elizabeth II on July 9, 2005, as part of the 60th anniversary of the end of the Second World War. Baroness Boothroyd, patron of the Women of World War II trust and former Speaker of the House of Commons, dedicated this monument “to all the women who served our country and to the cause of freedom, in uniform and on the home front.” After doing some research on this monument, I found out that the initial design of this monument involved a female Air Raid Warden sheltering children; however, the design was changed. The Monument to the Women of World War II has 17 individual sets of clothing and uniforms around the sides of the monument, which symbolizes the different roles women played in World War II. Some of the outfits include uniforms from the Women’s Land Army, Women’s Royal Naval Service, Red Cross nurses, Land Girls, Factory workers and much more. I really thought the Monument to the Women of World War II was interesting because this is the only monument I have seen without faces, just the uniforms or clothing of the women. Also, it is not every day you see a monument for the women who volunteered or served during World War II. I really appreciated the way Mills incorporated the different aspects and roles women played in the war by not showing their faces because it only recognizes a couple of women. Instead, his monument was dedicated to all the women in the war because it was faceless.